INCLUSIVE COMMUNITIES:  Raising Awareness About the Abilities of People with Disabilities 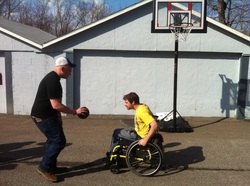