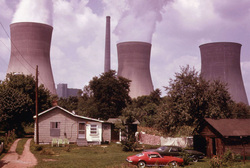 Throughout much of American history, photography served as a tool for civic engagement by allowing citizens to document perceptions about community strengths and weaknesses.  During the Progressive Era, social reformers used the medium of photography to document the effects of industrialization on Americans and advocate for change.  Similarly, photographers were employed by the Farm Security Administration to portray the challenges of rural poverty during the Great Depression.  More recently, the Environmental Protection Agency (EPA) initiated a federal photograph project known as DOCUMERICA to capture images of the environmental crisis in the United States.

Between 1972 and 1977, the EPA hired dozens of photographers to document the costs of environmental change. While some photographers focused on various forms of pollution, others tried to capture solutions proposed by the EPA, and a few attempted to depict the human condition in hopes of inspiring viewers to political or environmental activism.  In this lesson, students will examine featured DOCUMERICA photographs and make plans to create their own virtual gallery of photographs to show the state of the environment in Northeast Ohio today.

Activity One:  Review Tips for Improving Your Photos

Review your assigned photograph featured in the The Atlantic’s “DOCUMERICA: Images of America in Crisis in the  1970s” using the rubric provided below.  This review is intended to familiarize you with the rubric that will be used to assess your photograph and get you thinking about the approach you will take when attempting to capture current environmental issues or successes in pictures. Upon completing the rubric, be prepared to make a small group presentation in which you: