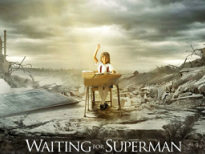 In 2010, director Davis Guggenheim released an awad winning documentary titled Waiting for Superman that sparked a nationwide debate on public education.  In 2011, Ohio governor John Kasich hosted several screenings of the film along with Michelle Rhee, former Washington, D.C. schools chancellor, in hopes of increasing the number of charter schools in Ohio.  Although the film highlights the nation's top performing charter schools, critics argue that the overwhelming majority of charter schools are unaccountable and prone to failure.

In this lesson, students will view this controversial film, identify areas where our current educational system is failing, and consider possible solutions to reforming the system. Students will also unpack the content of the film to best understand how the producer’s decisions shape the meaning and tone of his work.